Azure AD Password Protection has no additional infrastructure requirements for a cloud-only deployment.  For on-premises integration, it requires an Azure AD Password Protection Proxy service to be installed on a Windows Server 2012 R2 or later.  This service can be collocated on an existing server, including Azure AD Connect.  In addition, all domain controllers that require monitoring require an agent to be installed.  A reboot of each DC should be anticipated during installation.  The following shows the overall architecture and flow: 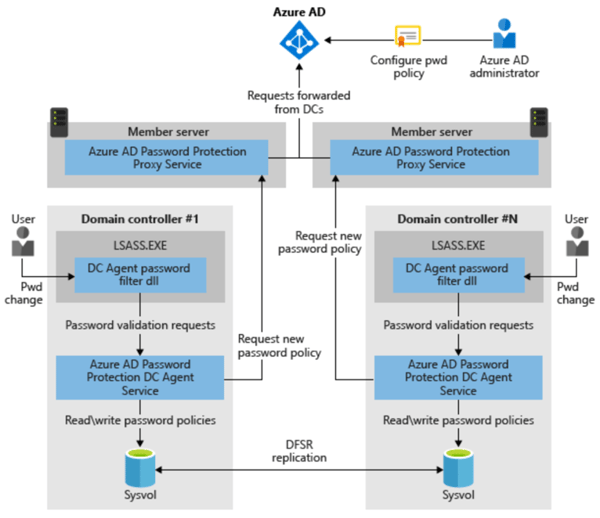 Azure AD Password Protection configuration is completely within the Azure AD Tenant.  Azure AD Premium P1 or P2 licenses are required for on-premises integration (additional deployment steps required).  On-premises Windows Server Active Directory users that are not synchronized to Azure Active Directory also benefits from Azure AD password protection based on existing licensing for synchronized users.  The following shows the settings and what each option is for. 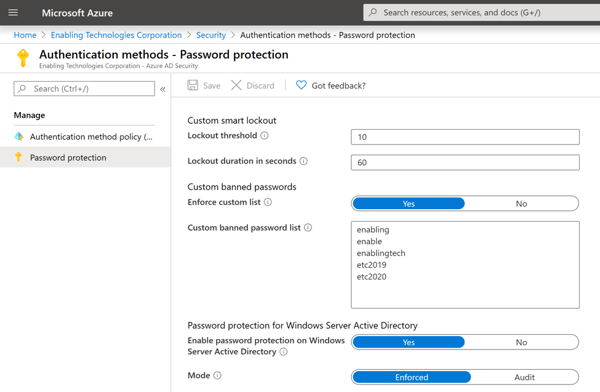 Whenever a user changes or resets their password, the new password is run through a Microsoft algorithm and process to check if the new password is strong enough.  This is based on a scoring system and a combined list of terms from the global and custom banned password lists. There are several items that are checked against when evaluating a new password and then a score is provided including:

Microsoft controls and maintains a non-public list of banned passwords.  When new terms are found and identified, they are added to the global banned password list.  This list is not generated by any external data source, but by all the organizations that are connected to Microsoft’s services.  They are constantly analyzing telemetry data from all organizations connected to their services looking for commonly used passwords that are weak or compromised.

Whenever a new password is changed or reset for any user in any tenant in Azure AD, the current version of the global banned password list is used as the key input when validating the strength of the password. This validation results in much stronger passwords for all Azure AD customers. 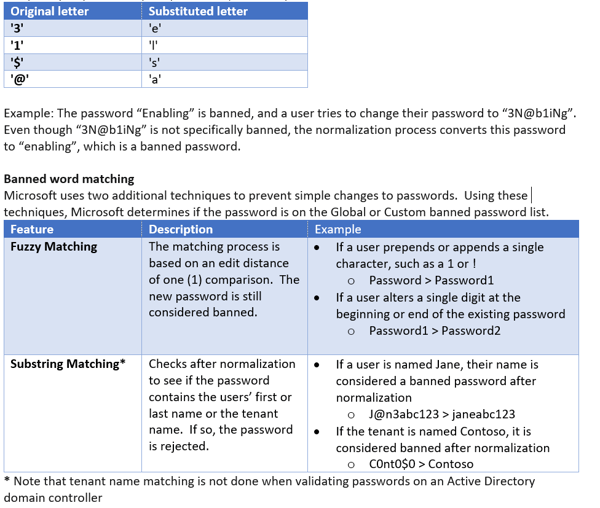 The next step is to identify all instances of banned passwords in the user's normalized new password. Even if a user’s password contains a banned password, the password may still be accepted if the overall password is strong enough otherwise (i.e. if “password” is set five times in a row it will be accepted). A newly configured password will go through the following steps to assess its overall strength to determine if it should be accepted or rejected.

When a user attempts to reset a password to something that would be banned, they see one of the following error messages:

Passwords will still be around for most of this new decade.  Even with password-less options available today, most organizations are not readily prepared yet.  Having a good password policy is important, but users can still abuse any legacy on-premises policy with tactics such as adding a 1 or altering a single character.  If the original password is leaked, the new password is just as vulnerable.  Azure AD Password Protection can extend modern techniques to help better protect your organization by using Microsoft’s algorithm and variant techniques.   Azure AD Password Protection is just one layer of protection.  Multiple layers of protection should be enabled, such as Azure MFA, to ensure a secure and productive environment.  Enabling Technologies can help you properly prepare for moving to the cloud based on Microsoft Best Practices and utilizing a secure and productive environment.  You can check out more in the Security section of our website.