OneDrive for Business is one of the fastest-growing Microsoft applications but has one glaring issue:  disk space.  In mid-2015, Microsoft included the ability to selectively choose which folders and files would sync to a local device but the change didn’t quite go far enough.  This change helped to preserve disk space on the local device but users could only access files that they chose to sync.  Microsoft listened and just announced a new feature known as OneDrive Files On-Demand.  This new features will allow OneDrive users to see and pick the data from the cloud when it is needed without having to sync all files or folders to a device.

This on-demand feature will only download files as they are needed.  New status icons in File Explorer will show whether the file is available locally or if it’ll need to be downloaded from the cloud.  If the file has been opened recently then it will be synced and available offline but you can still choose to sync all files and folders if needed.  The best part:  you can see all of your files without the need to consume disk space. 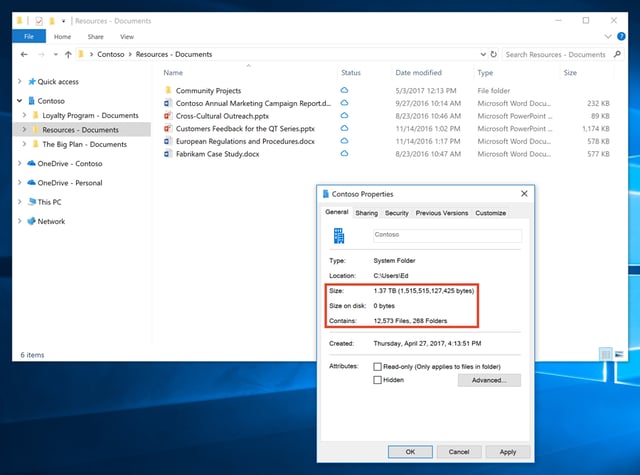 OneDrive Files On-Demand will be included with the Windows 10 Fall Creates Update expected to ship in September 2017 and will work with both personal OneDrive and OneDrive for Business.  For the full capability set and list of new features, check out the message from Microsoft at https://blogs.office.com/2017/05/11/introducing-onedrive-files-on-demand-and-additional-features-making-it-easier-to-access-and-share-files/