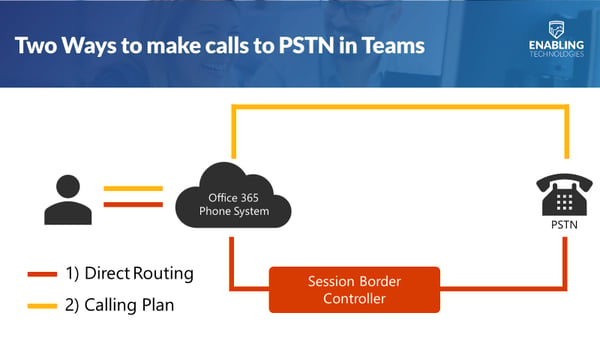 While it’s strategic to identify an approach at the outset of any Teams telephony project, but a single organization can use both options at once. In fact, for global organizations, some Direct Routing is necessary since Calling Plans are only available from Microsoft in 12 countries.

Dollars and cents make this decision obvious for many organizations. The evaluation is simple – compare current telecom costs to the additional cost of Calling Plans. Here’s some quick math.

Each user would need a Calling Plan. There is a $6/user/mo plan that provides 120 minutes of outbound domestic calling, or a $12/user/mo plan that provides 3,000 minutes outbound. For users who frequently make international calls, there is a prepaid plan available for an additional $12/mo. Inbound calls cost nothing. The outbound minutes are pooled amongst users in the same calling plan. For more details about the variable costs of Calling Plans, see below.

Neither example includes additional costs of toll-free nor international calls.

To complete the round numbers given above, consider the additional variable costs of both options:

Occasional outbound international calls made by users without an international plan are extra, as are inbound toll-free costs. A prior blog has details.

Subtle gray areas that also influence the cost decision include IT staffing capabilities, preferences for capital expenses vs operating expenses, and other subtleties. Third-party Contact Center solutions (beyond call-queues and auto-attendants) would cost extra in either case.

With direct routing, Session Border Controllers exist on site to terminate phone calls. SBCs can be deployed as an appliance, on virtual machines in data centers or on-premises, or in public cloud services like Azure. In all three cases, it's up to the organizations to manage the configurations and updates of the software. The common architecture for larger organizations is to centralize these Session Border Controllers rather than deploying one at each site. There may be use cases requiring an SBC in operational offices (see below). Finally, Direct Routing is required for international locations where Calling Plans aren’t available.

For larger and especially decentralized organizations, another administrative cost of Calling Plans is the time/process to breakdown costs and distribute them back to different business units who need to pay their share. This is because Microsoft sends a single bill for Calling Plans to the organization, which includes all usage across the entire O365 tenant. This bill includes variable costs like toll-free and occasional international calls, which are covered in a previous blog.

3. The Requirements of the Site

In general, traditional brick and mortar locations with traditional telecom needs are better suited for Direct Routing, where information-worker centric locations are a good fit for Calling Plans.

When a physical Session Border Controller is deployed in a Direct Routing scenario, that appliance can be a Swiss Army knife of sorts. It can terminate analog phone lines and bring them into Teams Calling Plans. This allows alarm systems, overhead paging systems, and door entry buzzers to connect. This is not possible when using virtual machines or if the SBC is in Azure. If an existing PBX needs to be integrated for a transition or long-term, an SBC can connect to it via SIP (or even a TDM PRI).

A short-term concern of Calling Plans is porting phone numbers. From Enabling’s experience, this process is much less onerous than in the past, with most orders to port being complete within a week. For organizations who prefer not to port their numbers nor change their local telephone service provider, Direct Routing to a Session Border Controller at each site allows them to keep that model. This increases the administrative overhead outline in Section 2.

Last but not least, the distribution of the users will impact the decision. On large campuses, where many users work on-premises, a Session Border Controller onsite makes sense. For organizations with a distributed or work-from-home footprint, Calling Plans are more efficient, since having voice traverse the Internet or VPN just to get back to an office location to access the PSTN adds delay and risk compared to connecting to Microsoft’s well-connected cloud services.

The Teams architecture is built for flexibility in all situations. A sensible approach is to use Calling Plans where you can, Direct Routing where you must. It’s been challenging for large organizations to neatly fit into a 100% Calling Plan model due to:

Finally, with Direct Routing, large organizations are tending to deploy SBCs in centralized locations. When absolutely necessary, the option does exist to support hardware and trunking in specific offices when needed (i.e. in a third-world country where #s cannot be ported to a central data center).