Up until a research firm found 38M records publicly exposed in 47 customers’ PowerApps portals, Microsoft’s default settings permitted public access to the data by default. The default has since changed due to this research (see #4 below), but it begs the question… Who plans, secures, and monitors low-code apps developed by citizen developers?

Low-code applications and robotic process automation have caught fire! Enabling’s PowerApps customers include CFOs, operations leaders, departmental chair-people, non-tech types. But with ease of use comes risk. Apps can be created then orphaned, expose too much data, and might connect to other systems insecurely.

What should an organization do to follow best practices?

People have big ideas, but they should start small. Get them started by optimizing their own personal workflow rather than creating an app for the department or enterprise. The simplest ways to wet their beak are Flows https://us.flow.microsoft.com/en-us/ and Dataverse for Teams https://make.powerapps.com/.

An inexpensive way for citizens to build a multi-user PowerApp is to create an app in Teams using the Dataverse for Teams. It’s a limited version of Dataverse, but way better than using SharePoint lists, and the price can’t be beat (free under most Office 365 A3/E3/G3 skus). Having citizens create their own automation using Dataverse for Teams app forces them to do two important things.

a. They must define their data 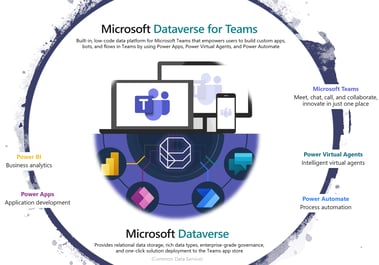 b. They must define their process

Doing both is a win/win. They get something working quickly, and if the app proves valuable enough for other groups, then the pro developer already has the structure and requirements they usually struggle to define. Note, once the app is published in a specific MSTeam, it’s stuck there. If it needs to be exposed to others outside of that Team/Channel, the others need to be added to that Team/Channel, or, painfully, the app needs to be recreated as a fully-featured PowerApp, the data mapped and imported, and be licen$ed accordingly.

Make citizens aware that their initial work is for themselves and/or their workgroup. Call them prototypes, or betas. Reinforce this by changing the name of the default Power Apps Environment to “Personal Productivity (default).” This name shows up at the top of their PowerApp homepage. This name infers that the default environment is the preferred place to start building personal productivity apps. When apps catch fire across an org, they’re often rebuilt by the pro developers.

“It’s all about me!” Citizens usually start with a laser focus on their immediate problem, not the extensibility of their app. But getting them to begin with the end in mind will save rework, security risks, licensing costs, and frustration.

One of the first standards to address is user access. Who needs to access the app? Do they authenticate? Canvas apps are easy to create but are limited in how they can be published. Currently, they are only accessible to users authenticated by Azure AD (AAD). If the target users are outside of the developer’s AAD, then those users need to be added as guests in the host organization’s AAD. An app might work internally, but not for Internet facing users. Decisions about user access also affect *gulp* licensing.

Other areas to standardize are default settings, documentation templates, and yes, security.

To fix the issue relayed at the top, MSFT said, “Starting with release 9.3.7.x, newly created portals will have table permissions enforced for all forms and lists irrespective of the Enable Table Permissions setting. Also, with the same release, lists on all portals (new or existing) that have OData feeds enabled will require appropriate table permissions setup for the feed on these lists to work.”

This could render some lists inaccessible if they are not altered. Table configurations can still be changed to allow for anonymous access, but manually and only when needed.

There’s also a tool for checking Power Apps portals and planned changes to the product so that table permissions will be enforced by default. Analyze and resolve Portal Checker diagnostics results - Power Apps | Microsoft Docs Use that Portal Checker to detect lists that allow anonymous access.

Multiple layers make up the security model of the Power Platform:

Even citizen developers should get training, either through a formalized program like UIpath http://www.uipath.com/community/rpa-community-blog/citizen-developer-foundation-uipath-academy-course or Microsoft Get started with Power Automate - Learn | Microsoft Docs, or informally through the SMEs at Enabling, who can train as developers learn on the job. No matter what the external training source, the key is to ensure everyone is given Internal training on security principles and standards, before they get officially certified to provide corporate-wide apps or connect to enterprise data.

It may be easy for a citizen to create an app, but scaling as a departmental or enterprise app is not so trivial.

As usual, MSFT has made PowerApp licensing a convoluted piece of… “work.” Put simply:

The questions to ask that affect licensing and costs include:

Once the COE understands the options, an org-wide standard should be shared with new devs as they complete their training.

When citizens develop their personal or departmental app, and it breaks, who gets the call? The Help Desk needs to at least know the ‘Owner’ of the app to escalate.

If the COE decides to publish an app for multiple departments or Teams, enterprise-level SLAs are necessary. If an app matures to this point, the COE or professional development team will likely rebuild the app according to enterprise standards and support models.

As the user base grows, and apps became more complex, every change will require more quality control. The COE should set up a role-based model where only a few citizen developers who fully understand the impact of changes can publish new iterations.

Like pro developers (sorry guys), citizens will not keep meticulous revision notes, at first. This will cause problems when rolling back to a prior version after a change doesn’t go as planned. Citizens should do regression testing and have a plan revert a change. Having notes that explained what changed in each iteration will identify which version introduced the change.

Microsoft’s PowerApps are already in the Leader’s Quadrant, but the defaults, security controls, and development standards can run amok if not owned and monitored by the COE.

Enabling’s PowerApp consultants can provide education for your COE and Pro Developers to successfully get your governance model under control. Ping us anytime!