I recently worked with a client migrating from Sonus VX1200 SBCs to AudioCodes Mediant 2600 SBCs. This included porting all routes, manipulation rules, and settings. The VXs were configured to work with various applications and devices such as Skype for Business, contact center, IP centric IVRs as well as analog gateways and endpoints.

I was able to successfully translate everything from the VX1200 SBCs to the AudioCodes Mediant 2600s, however we discovered one-way audio issues between the Public Switched Telephone Network (PSTN) and the IP-based IVR. What initially seemed to be a sporadic issue was one-way audio received from the IVR application (which relied on Dialogic HMP under the hood). Occasionally the caller would hear the IVR answer multiple times in a row, and other times you wouldn’t hear anything at all (silence). 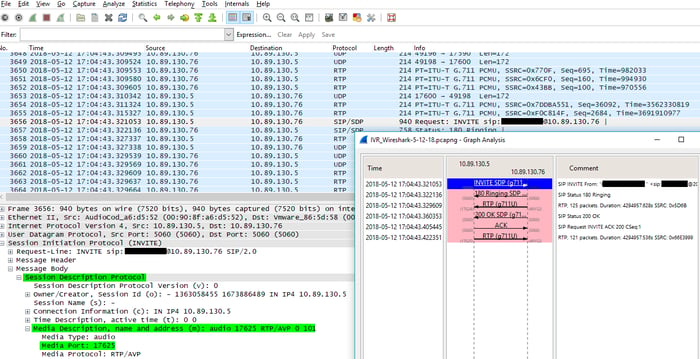 However, the IVR (HMP) sends the audio stream to port 17624…which is a port lower than the AudioCodes SBC requested:

The one-way audio issue experienced was a result of differences in RTP port spacing. Dialogic HMP utilizes even number ports only, while by default the AudioCodes SBC utilizes a mixture of odd and even number ports. I was able to work around this issue in the AudioCodes SBC configuration by changing the parameter “RTP UDP Port Spacing” from its default (5) to “10”. “RTP UDP Port Spacing” can be found via the AudioCodes web interface by going to: Setup -> Signaling & Media -> Media -> RTP/RTCP Settings -> General

Note: Changing this parameter requires a reboot of the SBC.

Per the AudioCodes documentation, the device allocates UDP ports for RTP and RTCP