By now you've patched your Exchange Servers to mitigate the vulnerabilities exposed on 3/2/21. Now it's time to shut the back door that might have been set up before the patch. The backdoor has been known to allow adversaries to perform web shell implantation, code execution, and data exfiltration. Microsoft warned that their patches “are not a remediation if your Exchange servers have already been compromised, nor are they full protection against attack.” In other words, keep hunting!

Unfortunately, even organizations that have moved their Exchange mailboxes to Office 365 are not immune from this threat. In almost every case, there still is a hybrid Exchange Server on premises, brokering on-premises Active Directory identities with Exchange Online. See more for the need for this server below. Even though this server isn’t hosting mail and isn’t in the mail routing path, it is still vulnerable.

To determine if the backdoor was created, Microsoft recently published a script to determine if a server has been compromised. Test-ProxyLogon.Ps1 checks targeted Exchange Servers for signs of the proxy logon compromise. Proxy logon vulnerabilities are described in CVE-2021-26855, 26858, 26857, and 27065. This script is intended to be run via an elevated Exchange Management Shell.

Active exploitations of CVE-2021-26855 (ProxyLogon) have occurred since early January. So, if your server logs are not retained for more than the past two months, Test-ProxyLogon.Ps1 may miss potential indicators of compromise. Also, non-Exchange servers that may have been accessed are not checked by the script.

Hunting for Indicators of Compromise

For both cases, it’s necessary to hunt using other means. What to look for? Indicators of Compromise, typically a specific file, IP, URL, domain, etc. that is a known malicious entity or compromise. Microsoft published a list of IOCs, showing the malware hashes that have been deployed and the files that have been altered in known compromises. The list of hashes and files to look for are posted at https://raw.githubusercontent.com/Azure/Azure-Sentinel/master/Sample%20Data/Feeds/MSTICIoCs-ExchangeServerVulnerabilitiesDisclosedMarch2021.csv

Just having a list of IOCs isn’t very helpful. You could manually search the C:\ of your Windows Servers for these files, but the cows will come home before that job is done. To scale, the IOCs must be imported into a Threat Intelligence solution to search to see if any of those indicators exist in your environment.

For instance, Azure Sentinel can import IOCs. Then you can use Sentinel’s Queries and Analytics to search activity in your systems: See Threat indicators for cyber threat intelligence in Azure Sentinel - Azure Example Scenarios | Microsoft Docs

Breaking down that list of compromises, the first 8 of 9 lines show hashes such as

which can be imported to scan for malware that is already present.

show files that have been known to be altered as an outcome of this vulnerability. Scanning for the presence of (or changes to) that list of files in your environment is necessary.

Aside from Advanced Hunting, What can be Done?

If you have confirmed that initial exploitation took place against an on-premises Exchange Server, Microsoft recommends that these factors should be evaluated:

Trend Micro’s best practices for situations like this include monitoring for:

An Exchange Server… but We're on Exchange Online?

As mentioned, even organizations whose mail is online very likely have an Exchange server on-premises. According to Microsoft, “Customers with a hybrid configuration often find after a period of time that all of their mailboxes have been moved to Exchange Online. At this point, they may decide to remove the Exchange servers from on-premises. However, they discover that they can no longer manage their cloud mailboxes.

Background of the Exploit

The exploit provides the ability to read all email and easy access to the victim organization’s other computers. The exploit has been attributed to HAFNIUM, a cyber espionage group, sometimes known as an advanced persistent threat, with alleged ties to China. They’ve created a unique vulnerability. Most zero-day attacks (for which there is no known vulnerability nor fix) are stealthy and directed at a valuable target. Zero days usually allow an adversary to compromise their target’s most valuable identities, data, or services, without a big splash. This time, it was anything but stealthy.

Organizations that have had these vulnerabilities exploited in their environment prior to installing the security updates should keep in mind that attackers could persist through web shells and other tools. These attack tools must be identified and removed from all affected devices. Additionally, credentials might have been accessed and compromised prior to the installation of security updates.

These vulnerabilities can be chained together to allow unauthenticated remote code execution on devices running Exchange Server. Microsoft has also observed subsequent web shell implantation, code execution, and data exfiltration activities during the attacks. This threat might be exacerbated by the fact that numerous organizations publish Exchange Server deployments to the public Internet to support mobile and work-from-home scenarios.

Attackers can perform various activities as shown in the diagram below (per Microsoft): 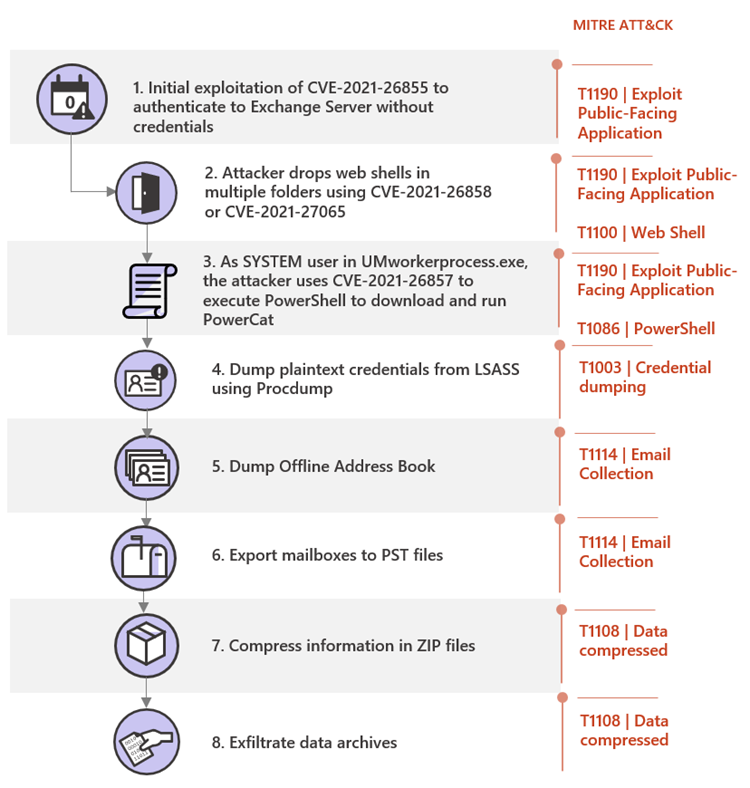 The news about HAFNIUM was anything but stealthy. On the contrary, over 30,000 organizations are impacted, not only by the creator of the attack, but by opportunistic attackers worldwide.

To ensure you’re not a statistic on this list, take this short list of steps above, validate them against Microsoft and CISA’s recommendations, and keep hunting.