Enabling has run our fair share of webinars and online events. After learning a few things along the way, this blog outlines options and some tips to avoid trial and error when running meetings that include pre-recorded videos!

Microsoft Teams provides two ways to schedule and meet as a group: Teams Meetings and Live Events. Teams Meetings accommodate up to 300 people and are interactive, allowing attendees to interact with IM and voice/video. A Live Event accommodates 10,000 viewers, has Q&A chat but attendees cannot activate voice/video, making it better suited towards one-to-many webinars.

Say a presenter has a pre-recorded video to include in an online presentation. They could try to run the stream from a browser or from their PC's media player by sharing their open Window. But sharing an open Window is risky, because any glitches on the computer or internet connection can cause glitches in the video that the audience sees. For instance, when sharing a video recording + audio of a person singing / speaking, the video and audio streams may be out of sync. The viewer may experience something like a lip-synced foreign action movie.

To eliminate the PC and internet connection from the variables, Teams allows you to upload a PowerPoint presentation rather than sharing an open Window. When a PowerPoint gets uploaded, it's sitting on the Microsoft Teams system, from where it streams directly to the audience. This is the best practice for any presentation using PowerPoint, and is especially critical when embedding a video within a presentation.  The screens and steps below outline how to successfully set this up.

To embed a video within PowerPoint

In order to stream the video directly from the Microsoft Teams Meeting, the video must be stored/saved within PowerPoint.

From the slide where the video is to play, select “Insert” / “Media” / “Video,” and “This Device.” Other options like “Online Video” still rely on the Internet connection to the media source (i.e. Youtube). Respecting copyright laws, there are tools allowing you to save video from YouTube to a computer. Remember, the video plays best from the slide deck itself, not a website.

After inserting the video into the slide, these three steps are critical for best performance and functionality.

1) A new tab appears at the far top right, called “Playback.” From the options in the center, change the “Start” option to “Automatically.”

2) Select “Play Full Screen” (also in the center, right below the “Start” options).

3) Select the “Slideshow” menu tab along the top, and unclick the “Show Media Controls” box.

Steps 1-3 force the video to play right away when that slide comes up, and eliminate the Play button from the PowerPoint. Is these steps are skipped, we have found that the audio does not play through the Teams meeting. 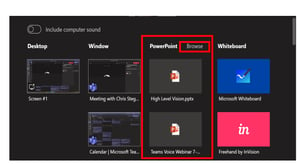 4) When in you're ready click the Share button in the Teams meeting, browse to select a deck using the “PowerPoint” column, not the “Window” column, as shown at right. Note this is where you *don't* want to select "Window."

5) When the PowerPoint finishes uploading, click the little eyeball button as shown below. That keeps participants from being able to scroll through the slides on their own. Make sure that eyeball has a line through it. If viewers are left with that eyeball active, they could scroll through and see/hear the video/audio before you get to that slide.  Spoiler alert!!

Here's a video tutorial for to ensure the steps are followed to make this happen.

The advantage Teams Meetings have over Live Events (as of 11/2020) is that in a Meeting, you to upload PowerPoints and share directly from Microsoft’s data center. Teams Live Events does not yet have that option. You have to stream the video from your local PC. When sharing an app/window, you run into the same lip-sync phenomenon mentioned above.

So to properly stream pre-recorded videos from a presenter's PC in a Live Event, the best means is to use two computers (I know, keep reading) and a Magewell USB Capture HDMI device. The first PC has the video file in it, and connects to the Magewell’s HDMI input. Then the Magewell’s HDMI Output connects to the second PC, which joins the Teams Live Event as a presenter.

The key is to configure PC #2 to use the HDMI input (from the Magewell) as its camera input, and to set PC1’s audio output to HDMI.

Then when in the Live Event, turning on the camera on PC2 while playing the video from PC1 effectively streams the video up to the Live Event service. The reason this is more effective is that PC2’s processing of audio/video through a (spoofed) “camera” interface is better than it streaming an app (like YouTube through a browser, or a video embedded in a local / shared PowerPoint).

The topology map is shown below, and some steps from Microsoft on how to set up and test are found here. Note: don’t touch either computer while the video is streaming… playing a video while attempting to click on the Q&A to moderate it from PC2 will pause the video!

The key is to configure PC #2 to use the HDMI input (from the Magewell) as its camera input, and to set PC1’s audio output to HDMI.

Note: don’t touch either computer while the video is streaming… playing a video while attempting to click on the Q&A to moderate it from PC2 will pause the video!

For other best practices for Teams and meetings, contact Enabling:  info@enablingtechcorp.com.