Cue the Rolling Stones... a new Windows is coming! No theme song could be as catchy as Keith Richards' Windows 95 riff, but Windows 365, the "Cloud PC," is likely to catch on for certain organizations and use cases.

With Windows 365, the operating system is provided as a service from the cloud. Instead of licensing, installing, and managing a local instance of WIndows 10/11 on a per machine basis, Windows 365 provides user access to the OS through a Virtual Desktop Interface.

- A new employee starts but isn't provided a PC on day one. The organization can provide an entire managed desktop and standard applications by assigning the person to the Windows 365 service.

- An intern needs access to apps that cannot be installed or files that shouldn't be saved to their own PC. The hiring organization can provide them with access to the specific services and security appropriate for their role.

- An animation artist is promoted to a graphically intense job but their computer isn't equipped with the latest GPUs. Streaming apps from the service will allow them to use the horsepower of the cloud on lesser-equipped devices.

- For some organizations who detest the minutae of managing operating systems, Windows 365 offers a hands-off method.

What's Behind the Scenes

Windows 365 is built on Azure Virtual Desktop (AVD). You've seen our blogs and webinars on Azure Virtual Desktop (formerly Windows Virtual Desktop). With AVD, customers set up their own virtual machines, deploy their own apps, and manage their own updates. Windows 365 abstracts that technology because Microsoft handles most of the plumbing. There is a very simple (albeit limited) "Business" edition, which requires almost no setup, and a more integrated "Enterprise" version, which integrates into existing AD, allows IT to manage printers, etc., and is managed by Microsoft Endpoint Manager (AKA Intune). In order to connect to Hybrid AD and the like. Enterprise does require some simple Azure virtual networking configurations. 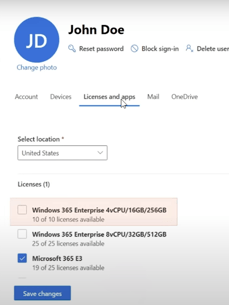 Windows 365 will be offered on a per month, per user basis. You can assign a specifically sized machine for a specific user persona, as shown at right.

In addition, a Windows E3 (or Microsoft 365 E3) license will be required for each user for the actual OS itself.

Users need to be part of an AAD Group that is assigned to a provisioning policy, which assigns them to an Azure region where their VM is located and specifies the image they should be receive.

There also needs to be a Virtual Network configured in Azure for Windows 365, in order for the virtual machines to connect back to the organization's Active Directory.

Users log in from a browser on whatever device they'd like, They can be prompted for Multifactor Authenication through Azure AD, and then be presented with a Windows desktop, including their shortcuts, icons, printer settings and other customizations. 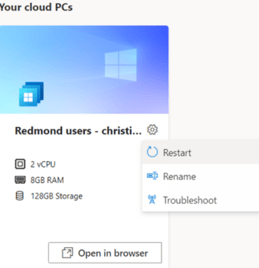 Unlike with Azure Virtual Desktop, users can restart their own virtual machines (without impact to others).

Win365 enables self-service upgrades for users if they need to upgrade performance and storage capacities of their cloud PCs. Admins will have a choice about what specs can be chosen by users. Users will not lose any data while moving to a larger size.

As more Microsoft services become available on a user/month basis, the options for supporting hybrid work continue to expand.

With the rumored price for Windows 365 starting at ~$30/user/month, extrapolating that out may make this service best for the temporary use cases mentioned above. A significant savings in IT pro labor may swing Windows 365 into positive ROI territory over time.