The surge in Microsoft Teams usage has been staggering. Yet the rush to enable @home collaboration didn't provide organizations with the time to plan for proper adoption and governance. A lesson learned in Bright Horizons’ Teams case study was to “Have all governance conversations up front. We’d started our Teams pilot before having done so, which was a little bit backwards.” (Nazanin Namvar, Manager of Business Analysis). Now is the time to catch up, before the sprawl makes Teams unmanageable and harder to use.

During a recent webinar on Teams governance, attendees took a survey which showed some important trends. Some of the key factors are outlined here.

40% of those surveyed enabled Teams to specifically respond to COVID-19, with 58% of those being corporations and 42% educators. Educators have been finding Microsoft’s edu resources to be helpful in their rollouts, but still struggle with interlacing meeting and messaging policies for students and faculty. A key lesson from Enabling’s experience with educators also applies to businesses: when creating more than one policy, ensure any user group that changes frequently is accounted for in the default policy, while more stable groups are placed in custom policies. That way, if users that come and go frequently (i.e. students, contractors/interns) are overlooked and not specifically placed into the custom policy, then they will be placed into the least privileged and most controlled (default) policy.

As shown below, 60% are using Teams organization-wide, 17% in IT only, and 23% are just starting. Those 40% have more time to launch with some controls, whereas the majority need a catch-up plan. Addressing the critical elements of governance is recommended for all situations.

If you didn’t have the time or buy-in to plan for governance up front, you’re not alone. Just 17% of firms addressed governance first, and then rolled out, leaving 83% either get started or to recover. 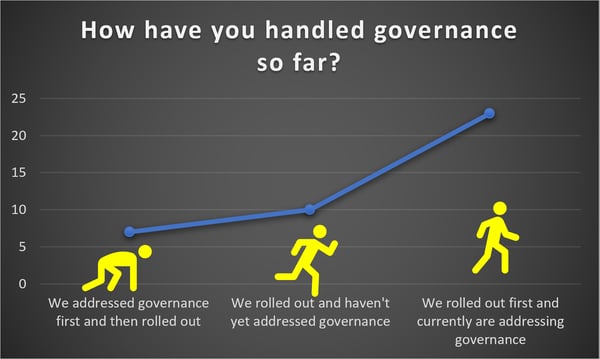 If there’s a silver lining, it’s that 85% said that management is taking governance more seriously now, as shown below. That should give you the clout to work with them to ratify your approach, and/or to request funding for the Azure AD Premium 1 licenses to optimally govern Teams. 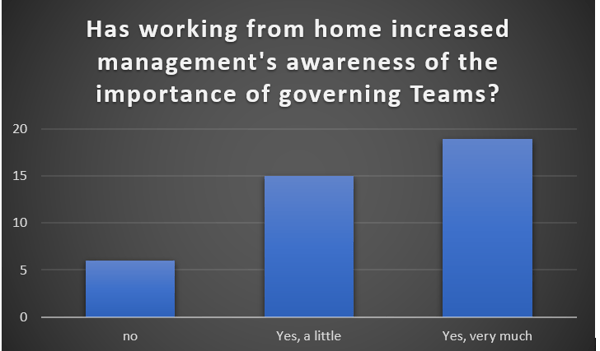 Among those surveyed, the most challenging aspect of governing Teams ranked as follows:

Along with a few one offs.

With no clear majority here, it’s apparent that each organization has its own unique point of view and should customize available templates to meet their needs. The data was consistent amongst those who have already rolled out and those just starting. Everyone knows Teams can sprawl and want to control it. In Enabling’s Governance Workshops, we focus on lifecycle management of Teams. That starts with options for restricting the ability to create Teams to users in specific Azure AD Security Groups (an Azure AD Premium 1 feature). As for naming conventions, some organizations keep tight control by having users open tickets request a Team that IT would then create. Others find the middle ground by allowing users to create teams but by blocking undesirable words from being created (i.e. how many “Management Teams” would there be in a large organization?). We showed the chart below to describe the spectrum of options. 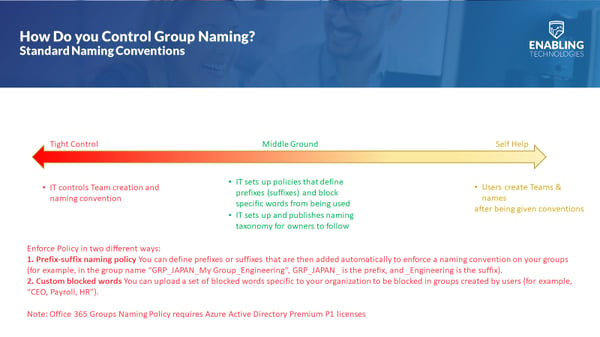 The more controls that are put into place, the more important it is to communicate and train users. The path to doing so varied widely, with the data showing only 27% are following a formal change management program. 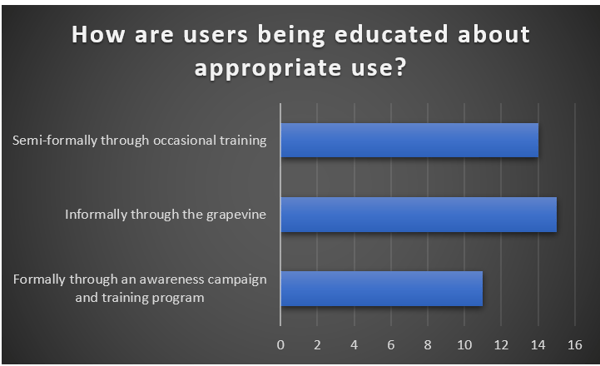 For the 73%, the lack of an adoption program will leave users to find their own way, often reverting back to tools or processes with which they’re more familiar. In regulated businesses, this can be problematic. When a Doctor reverts to a FaceTime call with a patient during a telehealth appointment after struggling with their PC video, they leave a secure, compliant system for a risky consumer-grade service.

No one reads every email, even when working at home, so varying the message and the medium will capture more eyes and deliver better results. When following Enabling’s Change Management Program, clients often receive 95% satisfaction rates and users open very few help desk tickets. As Bright Horizons’ Director Ellen Cameron said after engaging Enabling for Change Management services, “It was critical to get Teams right because we thought with the right adoption, we could actually change the way people work.” At home or back in the office.